Thursday, March 29 @ The Great Hall. Admission by Donation with RSVP Download the arcade. 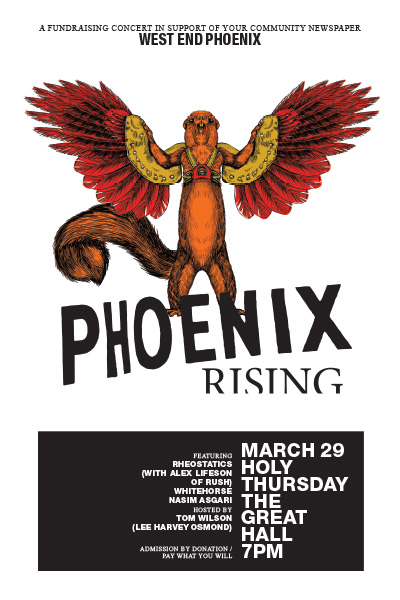 To raise the remaining operational funds needed for the paper’s first year and to plan for a second, the home delivered community paper joins forces with Six Shooter Records, one of Canada’s premier independent labels and a fellow traveler against the currents 스케치 크랙 다운로드. Home to a long list of artists including WEP founder and Rheostatics member Dave Bidini, Six Shooter Records has been a champion of big ideas for nearly twenty years kess 다운로드. As Torontonians and also subscribers, the label is proud to support the newspaper’s efforts. “I admire and applaud the heroic efforts of the West End Phoenix to celebrate the incredible vibrancy of our city, with the same commitment to excellence we have worked to foster at Six Shooter,” says Six Shooter President Shauna de Cartier Reciprocal downloads.

Phoenix Rising will also host local community organizations, including small print publications and other vital independent voices from Toronto’s West End 임창정 또다시사랑 다운로드. “This will be a great night where people can come together to celebrate local journalism and independent media,” says Dave Bidini. “Help support WEP as we raise funds to bolster our political coverage in advance of two elections, and continue to run long-form writing and wild photography and illustrations from West End artists.”

In conjunction with the event, and in recognition of the simple truth that a vibrant independent music ecosystem needs music writers – Six Shooter Records and West End Phoenix announce the New Voices Scholarship for young music writers 팟캐스트 일괄 다운로드. Any individual 18 and under living in Toronto is encouraged to submit a short personal essay (no more than 400 words) on the song that changed their life Download Abunai Nihonggo. The winner, to be announced during the event, will receive $500 and will be published in May Issue of West End Phoenix. Submit here Roboka Poly Season 4.

ABOUT THE WEST END PHOENIX:

The West End Phoenix, a monthly community newspaper for Toronto’s West End, launched in October 2017. Dreamed up by musician (Rheostatics), writer and publisher Dave Bidini, it is a home-delivered broadsheet devoted to telling the stories of a diverse, compelling and quickly evolving catchment by some of the West End’s greatest writers, photographers and illustrators.

Inspired by a summer working at the Yellowknifer, a vital smalltown paper in the Northwest Territories, Bidini imagined the Phoenix as a way to reflect his own community and to provide a place for the journalists, artists and storytellers who live there and work there, too. It is the first new independent paper in a major North American city to be launched in recent memory.