Okay, so the Sheriff and his droogies started trashing the joint and arresting folks when la Madame, that’s the name she liked to go by in those days, tumbled through the saloon doors waving her pistols. If there’s one thing she couldn’t stand, it was trouble in her house. Especially when she’d got a band lined up for the evening, and that night it was Wally and The Flap Jacks from St. Cat’s.

She’d worked damn hard to convince Wally and the boys to come all the way out there for a show. She followed them around for two months, leaving Marty in charge and everyone knew he was a bit of a half-wit. But that’s just how important this was to la Madame. Wally wouldn’t hear any of her offers though, on the account of how unpredictable things could get up in those parts. Musicians (or artistes as la Madame liked to call them) were at especially high risk, having no real experience with self-defense.

It wasn’t until she saved Wally and the boys and all their guitars and violins and the sort from a well-calculated heist staged by the very joint that was putting them up that they agreed to talk to her. It was her pair of six shooters that caught their attention. She knew how to play those things faster than Wally did the piano. She not only offered them a month’s room and board at her saloon, but cash guarantees and gigs across the country with guarantees, and protection. La Madame knew every saloon and snake in the grass from here to the border. And so it was agreed. Wally and The Flap Jacks hopped a train and la Madame beat them by a day on horseback.

She breezed into town that night with a sparkle in her eye, her guns still warm from adventure. She couldn’t wait to get her room filled with music and dancing having put the word out to everyone she knew a week before, including her other acts, and if Wally came on board she’d have eleven in total. But that night the Sheriff and his boys had other plans for la Madame and her artistes. He didn’t like her ways. The singing and dancing lessened the gambling, meaning the Sheriff wasn’t getting his due. He rounded up a few lawmen and took the saloon.

“What in hell is goin’ on here?” she demanded, and the room went quiet but for the Sheriff, whose wheezing made his grin all the more twisted.

“It seems you’ve got yourself a collection of fugitives here Madam. Fugitives and thieves. And I’ve come here to law them back where they belong.”

“So you think you can come into my place of business and harass my clientele and my employees and slink out before I can get a chance to defend them? I’ve got Wally and The Flap Jacks lined up for tonight, and I worked damn hard to get those boys to come out here! So if you don’t intend behaving yourselves, I’ll just have to make you! Marty, throw me my rifles!”

And then began the most famous gunfight Edmonton ever saw. La Madame gave those lawmen a real run for their money. She kept them busy long enough for most folks to clear out and sneak Marty around the back with her savings and her notebooks. And although a bunch of guys tried to help her, la Madame took a bullet and had to make a run for it. She hopped her horse still firing those six shooters and swore she’d be back some day. It’s said her last words before her silhouette burned into the horizon were: “Life is too short to listen to shitty music.”

Nobody saw la Madame again. But they say if you’re real quiet you can still hear her laugh and the sound of coin on the table in the wee hours of the morning, just when she’d be paying her bands. And although we don’t know for sure what happened to her, but we know that what she believed in survived. Six Shooter Records makes sure of that.

BEAUTY PASSES LIKE A DREAM – He pops open his suitcase and every item sits unremarkably. Unfolding and refolding his trousers, he counts the minutes like coins, pressing each one between his fingers. Unbuttoning his jeans, he looks down and no great geography lies there. The beginning was beginning to make him wonder.

He would describe her as dressed like the devil, always coming apart. When drunk and morose about a love affair, she had a tendency to look for the nearest window. Ordinary events bothered her and so she took to wearing mismatched shoes.

Traffic mutters outside his window. He thinks he smells sugar and is reminded of the distant past. How long has it been since he pulled the pennies from her eyes? He dusted her off with a corner of his sleeve and she stretched out of sleep as if from some faraway place. He looked at her and she looked at him and the expression was the same. “Sight restored!” she said, smiling with frank defiance, and the expression did not change.

Pulling on a pair of black trousers and fitting into a tight hat, the distant past snaps shut. He walks right out of the Mercy Hotel and she’s got his guitar in the trunk.

“Once we renovate the earth, we’ll feel right at home!” she says, striking a match against her thigh. “We’re leaving behind the bells and whistles for the open road, and when we git where we’re going we won’t be alone. So sing me something sweet, my angel, and tell it like it is, so when it plays on the radio I can say, ‘That one’s his!'”

And so it was in the front seat of the car that night. He sang about her brown boot on the fender, and all the snow coming from the moon. He sang of things forgotten on the plains of Manitoba, like his favorite T-shirt and his oldest friend. He sang into the following day, about all the drunken operations done on his broken heart by pretty girls, and all of the cigarettes he smoked in the summertime, and how he knew no evil star. He recalled bits of conversation held across an upright piano, and a phone booth by a gas station where a violin played to her lover. He confessed that the river made him, and in the lake lay his brother.

He promises to never leave her. She just smiles and pulls over. The sun spots him as he wanders from the car; she’s smoking over a road map. Looking up she squints at what seems to be a town and says, “I can hear the voices on the green. Pop the trunk and grab yer axe. We’ll walk from here.” Leaving the car and the road behind them, they approach the fold. “They love you when yer a hero,” she says, “and tonight that’s what you’ll be. ‘Cuz life’s too short to listen to shitty music, and beauty passes like a dream.” 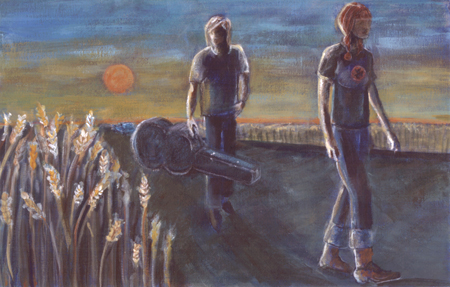 A guy A girl A guitar 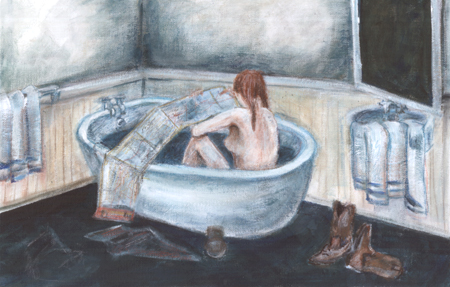 Light me a smoke 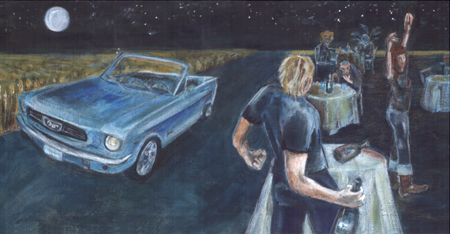 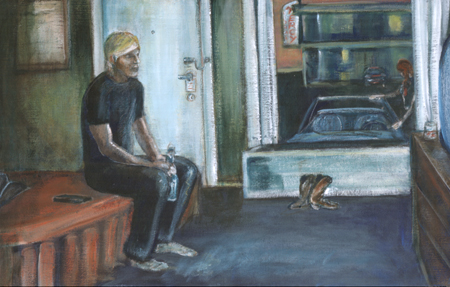 Sit and have a beer